Manetho was an Egyptian historian and priest from Sebennytos in Egypt who lived during the 3rd century BCE who wrote Aegyptiaca – the History of Egypt. His work has long been of great interest to Egyptologists, and is often used to help establish the chronology of the pharaohs. He was the first to use the concept of dynasties – the grouping of a sequence of rulers based on family or other unifying features, which he named dynasteia.

Manetho wrote his history of Egypt in three volumes, translating into Greek from hieroglyphic and hieratic sources. As a priest, he would certainly have had access to sacred records of all kinds.

In the centuries after Aegyptiaca was produced, rivalling advocates of Jewish, Egyptian, and Greek history, saw each side trying to establish the truth according to their point of view. Several epitomes of Manetho's work were circulated. This would have involved preserving the outlines and details deemed significant. The extent to which the epitomes preserved Manetho's original writing is unclear. Scribal errors and outright alterations and omissions likely ocurred, to further one of the competing agendas.

The Jewish historian Josephus quoted from Manetho in his Contra Apionem, about three centuries after Aegyptiaca was composed. He himself admitted that he did not have access to the original Aegyptiaca, only an epitome.

Another epitome was preserved by Sextus Julius Africanus in his Chronographai more than a century later. Yet another epitome was used by Eusebius of Caesarea a hundred years after that, in his Chronicon. That in turn was preserved by St. Jerome seventy-five years later in his Latin translation, and also by an Armenian translation two centuries later.

One thousand years after Manetho wrote Aegyptiaca, Syncellus recognized the similarities between Eusebius and Africanus, and placed them side by side in his work, Ecloga Chronographica.

Fragments of Manetho survive as quotations in many ancient manuscripts too numerous to mention here. For a detailed listing of the fragments, I recommend Berossos and Manetho (see bibliography below.)

The king-lists covered the walls of a sacred room, making offerings to celebrated ancestors. The purpose of these lists was not historical, but religious and/or political. Seti I did not fail to include Akhenaten, Tutankhamun, or Hatshepsut on his king-list at Abydos. It was deliberate, as he did not wish to make offering to them. Not because they were unknown, but because their reigns were to be erased from memory.

Manetho could not have based his history on the inscribed Abydos, Karnak, or Saqqara king-list, as they differ from each other and only name selected kings. As a historical source they are pretty much useless. His source was most likely something similar to the Turin Papyrus, with detailed accounts from the time of the Gods, all the way up to the third century BCE. As a priest, he would have had access to practically all written records in Egypt.

Manetho gave only one name for each ruler, despite that they had up to five official names. The transcribed names were not chosen consistently from the same name type, the reason for which is mystery. Manetho probably had sources for names that are unknown to us. In some cases, a transcription is possible, in other, the consonants switched places for unknown reasons, maybe due to translation errors by writers of the Epitomes.

The names transcribed by Manetho are still in use to this day, and were preferred until original king-lists were uncovered and corroborated. The use of the original names of the pharaohs is still in its infancy.

The sources of Manetho can be found in The Chronicle by Syncellus, written around 808-810. Unfortunately, only copies of the original exist. The Chronicle was entirely unknown until Manuscript A was discovered around 1600, and published by Scaliger in 1606. Scaliger only included selected passages, it was almost half a century later, in 1652, that Jacob Goar published the first complete edition of Syncellus. A few years later, Manuscript B was discovered, but remained unknown and unpublished for many years. In 1829, Dindorf used this second manuscript to correct readings in Goar's edition. It remained the standard edition until the Mosshammer edition was published in 1983.
Both A and B are complete copies, and were derived from a common ancestor. There are a few other incomplete copies of Syncellus, but A and B are the only ones that contain the texts of Manetho (via Africanus and Eusebius).

Simplified, here's how Aegyptiaca reached us: 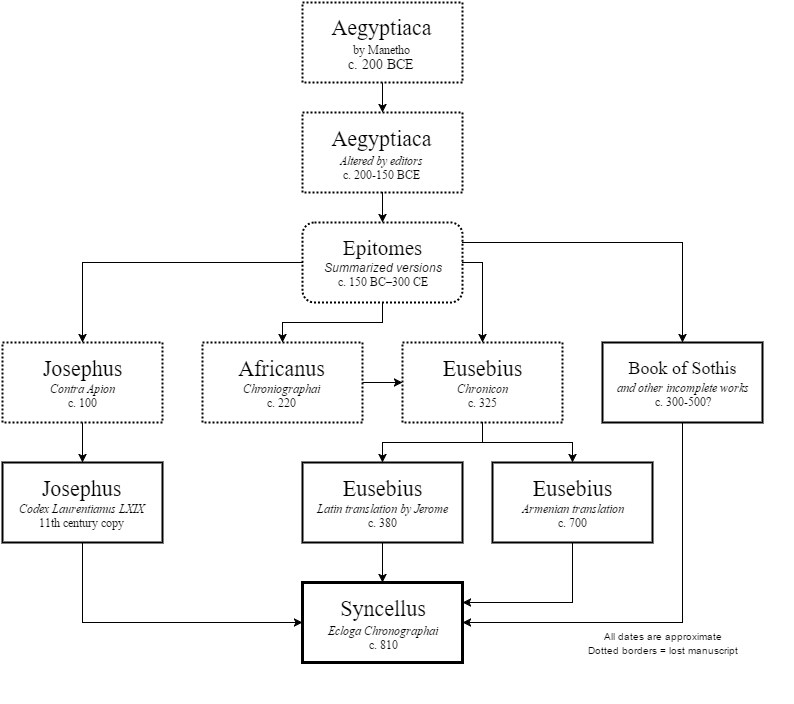 With 2336 hieroglyphic names of the pharaohs
© 2011-2020 by Peter Lundström — All Rights Reserved — V.2019-07-08
Disclaimer: The content should be accurate, but errors and omissions are possible. All information is provided "as is". Always check the sources.